In his letter to Titus, the apostle Paul writes “An elder must hold firmly to the trustworthy message he’s been taught so he can encourage others with sound doctrine.” By sound doctrine Paul means the biblical sort. There are various ways an elder can let go of the trustworthy message and so about once a year I go back to this really helpful way of identifying drift from biblical thinking to liberal taken from a lecture given by David Field at Oak Hill in 2005.

Liberal theology emerged from reformed theology by the gradual erosion of basic tenets. Like a stack of dominoes, once one of these tenets falls, the rest follow. They key to avoiding theological drift is to identify our own Achilles heal. Mine is probably catholicity, wanting to be friends with everyone. Once I make catholicity a higher priority than sound doctrine, my system of biblical thought will unwind.  I must be on my guard.

To do this exercise, read the following definitions, find your emotional point of entry and then work out which domino falls next after you’ve lost the first. It helps to print off the diagram and draw lines from circle to circle.

Empiricism and inductivism: This is the belief that science trumps revelation. Science explains “sin” and behaviour can be changed using pop pseudo-science. Here there is no such thing as sin against the holy God.

Anti-determinism: If you don’t believe that God knows the beginning from the end and that he does what pleases him, that’s anti-determinism.

Anti-enthusiasm: Jeremy Paxman wrote “the English like their religion in moderation.” Instead of intensity, certainty and confidence there’s cool, arm’s length detachment.

People are good rather than inherently sinful. The bible states that people are made in the image of God but are marred by sin. Once we overlook sin and can only see the image of God in others, it is easy to conclude that God won’t condemn the “good” people.

Reason verses revelation: Liberal thinking begins with autonomous thought, the belief that I can fathom all mysteries independently and that the bible is not authoritative revelation.

Toleration: The tolerant in this sense will put up with bad behaviour or sloppy theology without expecting change.

National religion: the belief that God reveals himself only in creation.  All religions are, therefore, valid expressions of natural revelation as all people sense God and try to put him/her/it into a system of words, codes and morals.  Natural religion says all religions are valid attempts to grasp the ungraspable.

Catholicity and friendliness: here, the goal is for everyone to hold hands and be friends.  There can be no division.

Anti-dogmatism: this is the belief that doctrine is bad because doctrine divides. Best not to belief anything too strongly for fear of upsetting someone.  Best not to have much if any conviction. 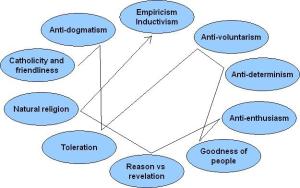 Here’s how it might work for me.  If I start with catholicity I’ll soon be anti-dogmatic.  Toleration follows with the belief that God’s will is weak and that he is not sovereign.  I begin to see only the “goodness” in people and start to lack enthusiasm for the gospel.  I begin to rationalise this and ignore scripture, at which point all religions are valid expressions of natural theology.  The science of knowledge apart from scripture takes over and I stop talking about “sin”.  As an elder I must beware.  What is your Achilles heel?

I am a 6'6" formerly ginger Scot, in a cross cultural marriage to my lovely Londoner wife. We've lived in SE Asia and since 2005, I have served as an Anglican minister in Wolverhampton and West Bromwich.
View all posts by neilrobbie →
This entry was posted in church leadership and tagged catholocity, David Field, determinsim, dogmatism, empiricism, Jeremy Paxman, liberalism, natural religion, Oak Hill College, reason, Reformed theology, revelation, voluntarism. Bookmark the permalink.