If I were curator of the Natural History Museum 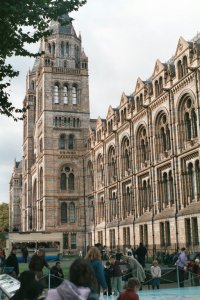 One of the many things we did in London at half term was to visit the Natural History Museum.  It was a fantastic family outing.  Over three hours grumble-free time with lots of “look at this daddy, this is amazing”, as the exhibits fascinated us all.  As I wondered around, spellbound by the wonder of it all, I tried to imagine how the museum could be enhanced to make it an even greater day out.

If I were curator, I’d start with the philosophy of science and work from there.  In his book, Unweaving the Rainbow, Richard Dawkins rightly says that the natural world should cause us to marvel, and not just at the beauty of creation but at the workings behind it all.  Science, the art of understanding how everything works, engenders a massive “wow” factor when we grasp it.  To enhance this “wow” we must go a step further to see creation as the art of the living God.  Everything which has been made points us to God’s character and so we can say “wow, if God made this work this way, then God must be like…”  Psalm 19:1 “The heavens declare the glory of God; the skies proclaim the work of his hands.”  The more we discover about the cosmos, the greater our marvel at the character and brilliance of God the maker of heaven and earth should be.  The multiple aims of science must include the aim of increasing worship of the creator.

And so, as someone with a scientific and theological background, if I were ever appointed curator, I’d leave the Natural History Museum pretty much as it is, but I’d join science with scripture and draw the mind of visitors from creation to creator.  Perhaps, as simply and as harmoniously as possible, I’d have scripture as part of displays.  So, for example, as I ascended the long escalator into the earth zone, through the cosmos, constellations and the core of the earth itself, I’d have Psalm 19 (see above) and Psalm 8 inscribed tastefully on the wall:

When I consider your heavens,
the work of your fingers,
the moon and the stars,
which you have set in place,
4 what is man that you are mindful of him,
the son of man that you care for him?

At the entrance or exit from the human biology section, where the amazing intricacies of the human body are explained, as far as we understand them so far, I’d inscribe Psalm 119:73

Your hands made me and formed me; give me understanding to learn your commands.

What about the section on the earth’s atmosphere, climatology and physical geography?  Proverbs 3:19-20?

By wisdom the Lord laid the earth’s foundations,
by understanding he set the heavens in place;
20 by his knowledge the deeps were divided,
and the clouds let drop the dew.

You get the gist.  Our exploration, discovery and understanding of the natural world should draw our mind to worship the creator as well as wonder at creation.  The museum would serve the visiting public better if our minds were helped, by scripture, to turn to contemplate the character of the living God as revealed in his living art and so to worship him.

I am a 6'6" formerly ginger Scot, in a cross cultural marriage to my lovely Londoner wife. We've lived in SE Asia and since 2005, I have served as an Anglican minister in Wolverhampton and West Bromwich.
View all posts by neilrobbie →
This entry was posted in The nature of grace, The nature of the giver and tagged curator, Natural History, Natural History Museum, Richard Dwkins, science, theology, Unweaving the Rainbow. Bookmark the permalink.